My name is Fabriccio Díaz and I am a 24 year cinematographer old landscape photographer from Guatemala, Central America. There is nothing better for me than to be hiking around the majestic and virgin lands of this country to capture God itself through my lens. 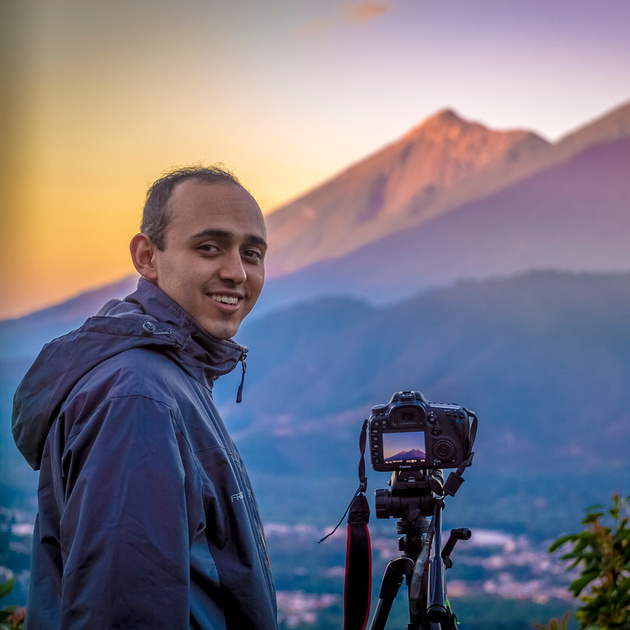 My passion for photography started one day before my mother's birthday in 2010. I didn't had anything to give her as a present, so I decided to go out and take photos of flowers with my Casio EX-Z35. I was sure that she would love them. While taking them I started to see the world from a different point of view. "There are so many things that are beautiful and we don't even notice them, details that God put here for us".

After getting involved in this huge world of photography a friend recommended me to start sharing my work on my Facebook profile and then in a Photography Group. People from all over the world started asking me what lenses, settings and camera did I use. After telling them that I used a simple Casio, they could not believe me. In that moment I realized that without having the best equipment I was getting even better shots than others that for that time had a better equipment than me.

It was until October 2012, when God gave me the surprise of letting me buy my first and actual DSLR: a Canon EOS Rebel T3, I was so happy. After using all my friend's equipment, watching endless times YouTube tutorials and asking professionals about it I was able to use it without even having one, until now.

On November the 16th of 2013 I was hiking Acatenango Volcano. My goal was to shot the Milky way but unfortunately the full moon appeared on the horizon and ruined everything on my plans, or that was what I thought. "God now that I'm here at almost 4000m above the sea level you don't want to cooperate with me, impress me, make something..." Imagine myself shouting to heaven. I was a little bit mad about the moon. Some minutes after that, Fuego Volcano erupted and I took it a sign of God telling me "Have a look, this is what you were shouting me for". Immediately I ran with a friend and took two long exposure shots from Fuego erupting lava. But it was in the second shot, 2 seconds before the exposure ended that two thunders appeared in a far cloud on the horizon. The shot appeared on my screen and I was speechless.

"This picture is going to win on a National Geographic Contest and I will wait for the right moment to share it to the world" I said looking to my screen. On December 2013 at the age of 17 years I was trying to register this picture on the 2013 National Geographic contest. Because of my age I was not able to do that. "This is not the moment" I said. The 5th of January 2014 a new inbox appeared on my mail "National Geographic The Moment Assignment" it said. "I was waiting for the moment and the assignment was called The Moment, this was a confirmation of God that this was the time". After almost three weeks of submissions and reviewing many photos, Jay Dickman, National Geographix Photographer, Pulitzer Winner and The Moment Assignment Curator, selected "Thunders and Explosions at Acatenango", as other 19 winners out of almost 21,000 submissions.

"God helps me putting in front of me the most indescribable natural phenomena to capture & show them to the world".